Barely a subway stop away from St. Stephen’s Green, your ticket to Platform 61 is finally here as the newly-opened underground kitchen cooks up some of the tastiest grub South of the city, providing a service worthy of the VIPs catered for at the elusive ‘Platform 61’ on the New York subway for which it is named. They don’t take Leap Cards, but you’re sure to be warmly welcomed on arrival!

Reserved for presidents and art-enthusiasts lucky enough to be on the guestlist for one of Andy Warhol’s famous ‘underground parties’, the story of the secret platform beneath New York’s  Waldorf Astoria Hotel is a treat in itself to listen to, the various Warhol quotes around the walls and abstract banana signposts in the bathroom reminding you at regular intervals that there is more to this restaurant than meets the eye.

As you enter through golden doors reminiscent of 1960s New York elevators and decor Don Draper (Mad Men) would be proud of, you can’t help but feel slightly disorientated as the black marble walls mirror one another, making great use of a small space yet still succeeding in coming across extremely classy.

Only in it’s third week of business here in Dublin, there was no sign of any maintenance work or staff ‘only learning’ the ropes, and the service ran smooth and punctual from one course to the next. A mixture of options on the menu caught my eye as we debated over what direction to take, eventually settling on the ‘Italian Mozzarella and Tomato’ dish and the ‘Shrimp Gambas’ to start. I’m a fan of small menus as it minimalises decisions, but to be fair everything looked very good and we weren’t disappointed, each dish being served promptly and proving realistic portion-sizes, unlike many of the new food-stops that have sprung up recently around Dublin.

The steak was sampled, as was the Superfood Salad with added chicken, and although prices slightly outreached that of the average commuter dinner it was made up for in taste and quality, the sweet potato fries on the side adding a delicious kick and nice reminder that eating out doesn’t always have to mean greasy, unhealthy & unnecessary indulgence.

Our munching on the shrimp and subsequent pomegranate seeds in my Superfood Salad was accompanied by an absolutely killer playlist in the background, the likes of Alt-J and Foals providing the icing on top of the dessert that we were too full to order, though in hindsight I would have liked to try the Flourless Nut Brownie.

The lunch and brunch menus also looked incredible, the ‘Stun Bun’ in particular catching my eye, a ‘grilled chicken fillet on a brioche bun with guacamole, tomato, onion, baby gem and homemade tomato relish served with spicy potato wedges’. Due to it being still in the early stages of the restaurant opening, however, the waiter informed me that they had yet to start serving this menu, instead focusing for now on the dinner options. I will definitely be back to sample a Stun Bun when they do!! 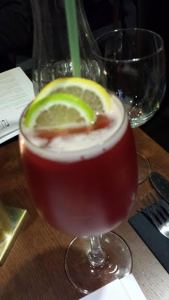 A glass or two of Chilean White wine and a house speciality beer cocktail later (a delicious concoction of Luxembourg-brewed beer, lime and apple juice) the whole experience was over too soon as we had to leave to catch the next train home.

Navigating our way out to the world back above ground it was easy to see how Platform 61 would go unnotticed, a haven glowing golden down below one of the busiest streets for bars and restaurants in the city.

Overall we were extremely pleased with the experience, and will definitely be recommending the service for anyone wishing to be transported back in time as they chow down on great food, the journey from starters right through to a final farewell complimentary glass of wine proving comfortable and enjoyable, in a stimulating and artistic environment.

‘Mind the Gap’ and be wary of the steep steps on the way out of the platform – especially if you’ve sampled some of the beer cocktails!!