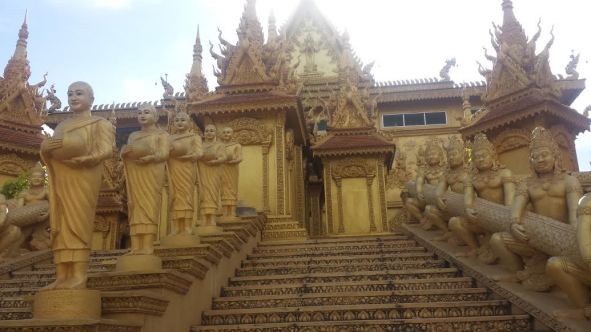 In a far cry from wandering around Templebar in Dublin of a Thursday afternoon, I spent my first few hours alone in Phnom Penh wandering around the temples of Wat Kien Khleang, or Mongkol Serei Kien Khleang Pagoda. Partly visible from the hotel in which I’m staying for the first few nights of my orientation, the ancient temples are situated side by side to modern day constructions and oddly mismatched with the various motorbikes and cars parked around them. 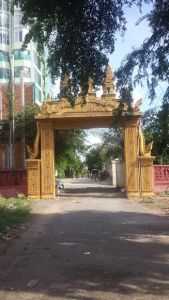 Situated about a 15-minute drive from the center of the city and overlooking the Mekong River, the compound is just off the road that leads (as I gather) out to the Koh Dach, or Silk Island, another attraction on my list.
The clearing in which the temples can be found was eerily deserted as I approached, and I found myself wondering was I supposed to be there at all, yet some reassurance from a local that it was ok to have a look around was enough to set me at ease. 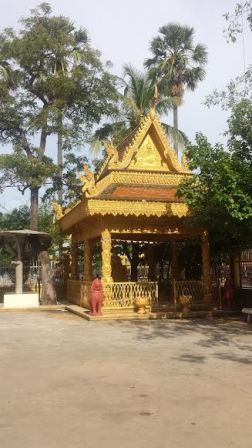 The huge, ornate and elaborate designs are absolutely beautiful to observe, with distant chanting and clattering of local children in the distance providing a peaceful yet dynamic setting for the temples to be in, giving me the sense that they really are at the heart of the culture here.

These stairways really envoke a sense of power as you approach and enter the buildings, asserting the temples and the Buddhist faith itself as a strong sense of physical and spiritual prowess. 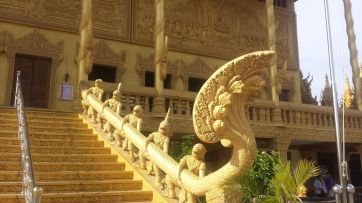 Some of the temples depict painted murals of the Buddha’s journey, and although many were faded with dust and time it was clear that they are still held in very high regard by the locals as they all sat outside or within the vicinity of the dwellings instead of remaining inside. I didn’t go inside either as I had been advised against entering any place of silence – and the entire perimeter of the place where these temples shine gave me the impression that it’s not a very frequently-visited spot by tourists – I just happen to be staying very close by! 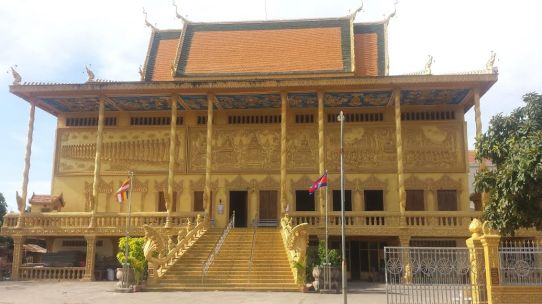 This is the one of the larger temples in the compound, and was occupied by a scattering of worshippers I only noticed were there after walking around the outside a few times. There were also several monks sitting alone at the tables outside, whom I recognised from their bright orange sarongs. Hopefully I will get to learn more about the monks at some point and see more of their daily lives – a few glimpses of groups of them earlier as I went through town on a tuk tuk had me extremely intrigued.

I did have to be careful however as some local moto drivers approached me asking (or so I thought) would I like a lift into town. As I gradually understood that he meant for free and to a place with him for drinks I awkwardly laughed at the ‘misunderstanding’ and immediately started making my way back to the hotel, my first solo venture having proven successful enough, yet ultimately slightly unplanned. I was still far too jetlagged and had lost any concept of time after a 16-hour long journey, and I decided that the rest of the city could wait for further exploration at a time when I was more awake and rested.