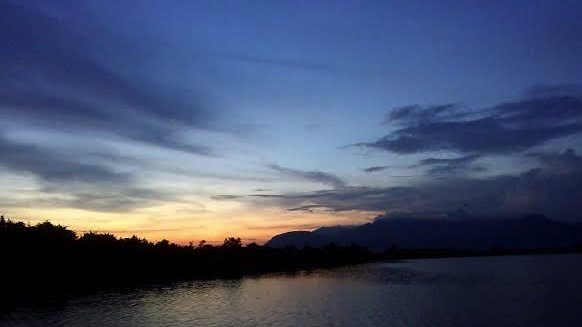 As I tentatively tugged the right handlebar of the heavy 2-wheeler towards me, I felt a surge of power and heard the grumble of the engine cut through the silence of the morning like the sudden snores of a drunkard sleeping with his mouth open after a particularly heavy night out. It was a feeling of power within my grasp that I’d never quite encountered before, and as I pulled back further and further on the throttle, gradually releasing more and more power and feeling giddy at the speed I was gaining, I couldn’t help but smile.
I’m free!!!
I took ten to fifteen minutes before leaving to circle the grounds of the yard, just to get to grips with the controls, but by the time it came to leave and follow our guide through the narrow streets of Kampot and up toward the shadow of the lonely Bokor Mountain (I couldn’t help but compare it to ‘The Lonely Mountain’ from The Hobbit!) I was raring to go, and more confident than I’d ever thought would be possible for me on such a vehicle.

We rented the motorbikes from The Mad Monkey Kampot’s own rental company who, as we learned the hard way, are NOT great at negotiating group prices and /or tour guides. Eventually, after almost an hour discussing prices and trying to keep ‘cool hearts’, we were sorted with our bikes and two ‘guides’. Terrified as I was of losing my balance on the motorbike and causing a pile-up on the narrow and steep uphill climb to the peak of Bokor Mountain, I persevered and was gladly rewarded with a stable confidence after a few minutes of initial terror. We were informed on the way that we’d have to stop and pay for fuel refills ourselves, which we did begrudgingly, yet also got free rice crackers to keep us going on the way. As we drove further and further out of town towards the countryside and the beckoning heights of Bokor Mountain, I actually grew to really enjoy the biking, and made sure to get use of the 24 hours I’d rented it for by taking short trips to and from the shops and breakfast the next morning! It wasn’t for everyone, however, as the prospects of riding a motorbike in Cambodia after witnessing the madness of Phnom Penh understandably put us off somewhat. We managed to get through the entire trip with no major incidents, a massive downpour of rain drenching us to the bone as we passed through a cloud on the way down the mountain being the worst of it, only to emerge just as suddenly to heat and sunshine on the other side which dried us off almost immediately.

Seeing the giant statue on top of the mountain clearly having some work done made me laugh and ironically made me think of how even The Buddha needs some TLC sometimes! I felt balanced and controlled at the summit, and proud of the fact that I’d made it up so far with only a minor burn from the exhaust pipe on my left leg to show as signs of battle.

In Kampot we ate in local restaurants The Rusty Keyhole, Veronica’s, and of course The Mad Monkey’s own yummy bar area at varying intervals. The Rusty Keyhole proved a popular favourite amongst our party, yet also quite small – they had no room for us at dinner, and so we were forced to make a booking for the following morning for breakfast!

On the final evening we all booked a private boat for a sunset tour up the river in Kampot – The ‘Fireflies’ tour which lived up to it’s name as we stopped at several points along the way to observe and catch the fireflies which lit up the shrubbery along the banks in a Christmas-tree like display of twinkling and shimmering. The old man and his son who steered and moored the boat were amazing guides, pointing out and explaining all points of interest and even giving us basic Khmer lessons – my day was MADE to discover that ‘nom’ in Khmer means ‘cake’! I was so thrilled to discover that literally saying ‘nom nom nom’ means ‘cake cake cake’ in Cambodian that I didn’t stop saying it all night!

The good company and beautiful scenery brought a lazy close to a busy day as the sun set behind the Elephant Mountains, the fireflies providing a trail of fairy lights to lead us home. This tranquility and festive atmosphere kind of made me think of home briefly and how everyone will be gearing up for Christmas in the next few weeks, and my mind was filled both with contentment at the proximity of the holidays on my return, and with a strange emptiness that I am not there to experience the build-up this year – often the best part of any major holiday. It only took a blink or two however and a glance around at my present surroundings to shake these thoughts from my head and focus on the amazing opportunities and experiences that are currently within my reach.

We enjoyed good food in Veronica’s, a glass of wine or two drooping the eyelids of weary travellers’ eyes like the slow ebb of a tide not yet sure if it’s on it’s way in or out to shore. It was expensive enough in comparison to some of the local food places, but it was a nice way to mark the end of a fun weekend. There was a pool party in full swing on our return to The Mad Monkey, but I stayed only for one more before calling it a night, if it could be called that with the music playing late into the night….One thing The Mad Monkey is not is being a place for catching up on lost sleep!

Tours to the summit of Bokor Mountain in The Elephany Mountains and motorbike rentals are available at various places throughout the village of Kampot, though ours was organised exclusively through The Mad Monkey’s own operators at reception, which was easier seeing as there was a large group of us. It worked out at $6 each per bike, and a further $3.50 for the Fireflies cruise (group rate for a private boat).

The Giant Ibis Bus company to/from Phnom Penh worked out the most affordable form of transport, and worked out at $8 one –way for all passengers. (Most Cambodian bus companies charge extra for ‘foreigners’, but Giant Ibis have regularized all fees, hurrahh for equality!!) Buses leave